Serving the Washington D.C. Federal Workforce of CIS and ICE

“Who better to represent and speak for the people, than the people”. 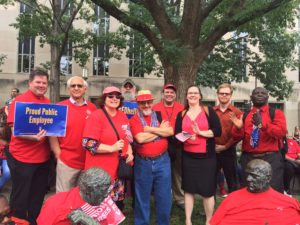 Local 1924 is one of the largest of several labor organizations representing federal workers; affiliated with the AFL-CIO. Local 1924 represents some 2000 bargaining unit employees of US Citizenship and Immigration Services and US Immigration and Customs Enforcement in the Washington DC area, the state of Virginia and overseas offices. We promote employee rights through public policy advocacy, legislative action, collective bargaining, grievance handling, litigation and alternative dispute resolution. Local 1924 practices effective delivery of government services to the public through creative problem-solving and implementation of sound business practices in partnership with Agency managers.

Congress has began fundamental reform to the U.S. refugee program – and is changing for the worse. Congress has finished the H.R.2826 markup yesterday, and the republican party has released their official statement regarding the bill.

When it comes to the rights of the people, AFGE supports every American citizen, Local 1924 members and have drafted a statement of opposition that was also entered into the congressional record to advocate further reform of the bill. Links to all of these documents are listed below for review.